Our first priority is the health and wellbeing of our customers, retailers and staff. We now have a social distancing etiquette in place at our centre. Please click here for details. Thank you for your consideration, patience and understanding in helping to keep us all safe.

Eddie the Eagle Flies Back for Crystal Peaks 30th

EDDIE ‘the Eagle’ Edwards will be flying back into Crystal Peaks as the award-winning Sheffield shopping mall celebrates its 30th anniversary.

Eddie the Eagle is the British skier who in 1988 became the first competitor since 1928 to represent Great Britain in ski jumping, becoming a much-loved national institution following his appearance at the Calgary Winter Olympics of 1988.

It was at the height of his fame that he was invited to cut the ribbon at Crystal Peaks, Sheffield’s new of town shopping centre.

And now he’ll be back, leading the Crystal Peaks 30th anniversary celebrations on June 16 and unveiling a specially commissioned birthday work of art - created by Crystal Peaks shoppers!

Working alongside the experts from Sheffield’s Fired Arts Craft Cafe, shoppers and visitors young and old are being invited to create images on special ceramic tiles that will then be assembled into a major 30th anniversary mural that will go on public display in the centre as the focal point of the celebrations.

The special crafting sessions will be held daily in the Crystal Peaks Central Atrium between May 28 and June 1, with the aim of creating 500 colourful individual tiles on the theme of the mall’s landmark birthday.

“It could be an image that suggests what you like most about Crystal Peaks or perhaps a simple birthday greeting - it’s a completely blank canvas and the choice is yours.

“You don’t need any great artistic talent - the Fired Art team will be there to help - and it’s a true Crystal Peaks community project that’s open to absolutely everybody, free of charge.

“We want all of our customers to be part of this milestone anniversary and come along to join us as we welcome back Eddie the Eagle to lead the celebrations.” 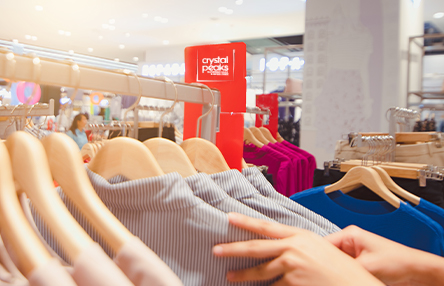